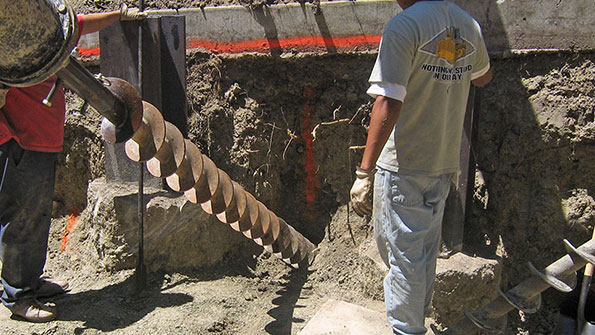 Stevens, Ferrone & Bailey Engineering Company (SFB) was the Geotechnical Engineer of Record for a hillside stabilization project in Orinda, California. The stabilization project was the result of the downslope creep and movement of a block of bedrock. Extensive land improvements including residential structures were previously built over the top of the bedrock and were experiencing detrimental movements. SFB was retained to perform a detailed forensic investigation of the previous designs and construction, and also to determine causation. SFB performed geotechnical and geological subsurface investigations, detailed research and aerial photography review, laboratory testing on retrieved soil and rock samples, surface and subsurface monitoring, mapping, surveys, and slope stability evaluations to assess the impact the bedrock movement would have on the upslope improvements. Surface and subsurface conditions included expansive soils and expansive bedrock, dip slope rock bedding, faulting, and water seepage. 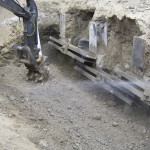 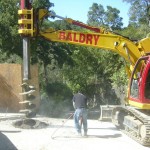 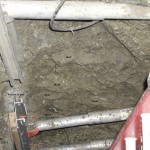 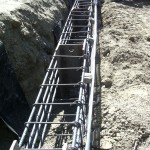 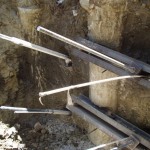 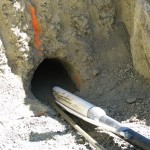 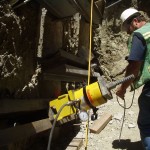 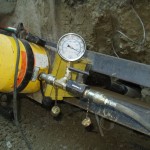 Detailed designs, plans, and construction specifications were developed by SFB in order install hillside stabilization measures. Stabilization measures primarily consisted of drilled, cast-in-place caissons extending to depths of 35 feet. The caissons were connected with two rows of steel walers. The walers and caissons were pinned at the top using tie-backs extending to distances on the order of 80 feet. SFB prepared a detailed inspection plan of the critical elements for the project, namely for the drilling and inspections of the caissons, tie-backs, and all earthwork. Inspection and testing was performed by SFB throughout the project, including logging and observing the drilling of all caissons, observing installation and pull-out testing of tie-backs, compaction observation and testing of all backfill, inspection of all surface drainage, and Special Inspection of concrete and steel construction. SFB provided progress reports and a final construction report to the owner during and after the completion construction.